Swim has been the right stuff 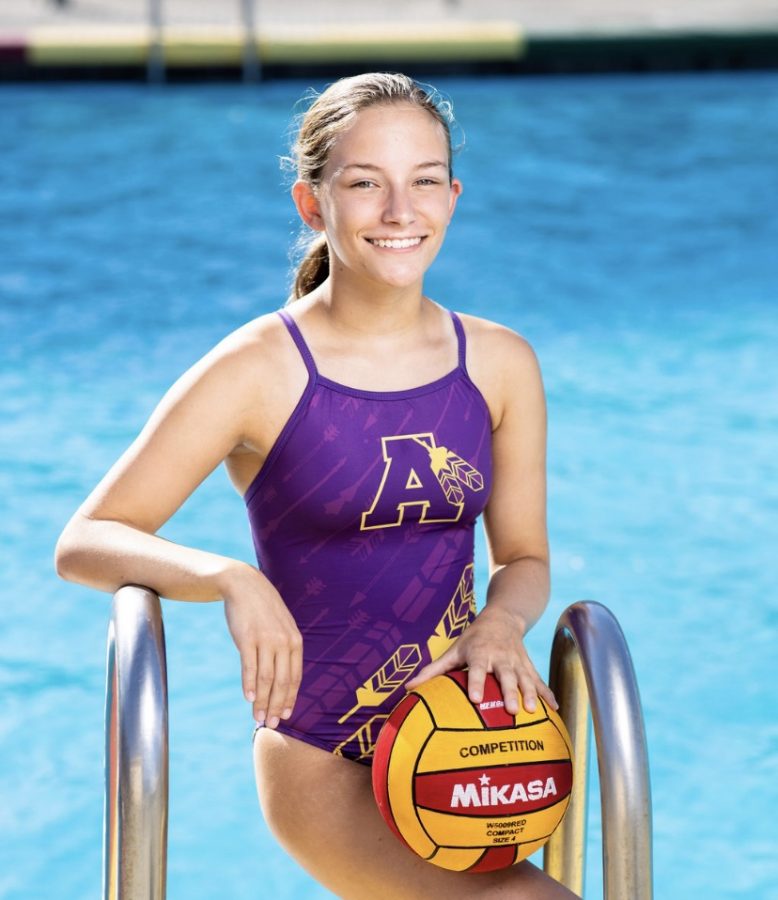 She started with Swim, but dives into Water Polo this month.

“I chose to go into swimming because my friend Genece kept telling me to try it ‘even just for one day’ to see if I liked it,” said Hailey Mendelsohn. She did like it, so she stayed. When she tried as a teenager, it wasn’t the first time she’d been in the water, though.

“I used to take swim lessons at Alan Witt when I was way younger,” she said. “My aunt is the one who took me to swim lessons when I was younger…. We used to swim together all the time when I visited her.”

She started swimming for Armijo in her sophomore year and has kept up with it throughout her time at the school. She’s participated in Monticello Empire League (MEL) meets, but no other championship races. MEL “is the big meet we have with all of the schools at the end of the year. Everyone goes to this, though, so I’m not sure if it counts as ‘championships’,” said Mendelsohn.

“I’m not the fastest swimmer, but I try to focus on bettering myself,” she said, and while she hasn’t broken any school records, she continues to improve. Her favorite stroke is the breaststroke.

“My most memorable meet was probably the MEL meet that I went to my sophomore year, the only MEL meet I’ve gotten to go to,” she said. “It was just a really fun experience for me even though I didn’t do that well.” She placed 9th in one event and got disqualified in another. “My teammates brought snacks and played music while we waited our turn for events. Nothing super exciting really happened, I just remember it well because it was really fun.”

Like most athletes, COVID completely ended the 2020 season. “We did one swim meet and then, a couple days later, everyone stopped going to school. I was especially disappointed because we had just ordered new swimsuits (which I helped design) and we didn’t even get to wear them to a meet!” she said.

While water polo normally happens in the fall, with the new truncated schedule it is happening after the swim season this year and Mendelsohn plans to extend her time in the water and join the team, although she has not been on the water polo team before.

As someone who spends a lot of time in the water, probably her biggest complaint about Armijo has to do with the pool tarps. “Most of them don’t have ties, which makes it impossible to roll them up and take them off of the pool,” she said. “They’re also crusty and disgusting…. At least half of them are torn in half, which makes them even more difficult to use. We’ve probably had the same nasty tarps for a billion years. I wouldn’t be surprised if they were older than me with how disgusting they are.”

After graduation she’s not sure if she will be pursuing swim as a school sport. “I don’t really want to swim on a team, but I think it would be nice to continue swimming on my own just to stay in shape and whatnot,” she said. “I have been thinking about finding a club/intramural water polo team to play for, though.”

“I hope to attend UCLA in the fall! (I’ve already gotten my acceptance letter, woohoo!)” Her goal is to study molecular biology. “After getting my degree, I may or may not go to graduate school…” Mendelsohn said. “I want to either become a pathologist or someone who does research in a lab. I really love biology, but I don’t really want to be a doctor or anything because interacting with people wears me out. I think being a pathologist or doing research would be a career that is still helpful without being too stressful for me.”

She’s spent a lot of time in the pool over the years, but has also enjoyed a lot of activities on land. “I’ve been enrolled in the IB program since freshman year. I’m also part of many clubs such as Art Club, NHS (National Honor Society), and College and Career club. I’m president of Art Club and treasurer of College and Career Club.

“I also participate in marching band. I play the clarinet. Previously, I played in jazz band (where I played baritone saxophone) as well as beginning concert band (where I played clarinet). I also do a lot of community service stuff such as making cards for hospice facilities and teaching art lessons for the local library,” she said.